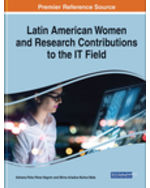 
Latin American Women and Research Contributions to the IT Field, 1st Edition

Although the effort to involve women in engineering has risen in recent years with the creation of new initiatives and the promotion of inclusion in technical disciplines, the active participation of women in engineering professions is continuously lower than expected. While the need for engineers appears to be constantly increasing, women still do not fill most of this role and have a long way to go to even reach an equal split in the field. This gender gap has a significant impact how women in the STEM fields are perceived as well as their experiences in their education and careers. When it comes to Latin American women in IT, their contribution to science can go unnoticed, their participation levels in these fields are very low, and they often occupy lower-level positions than their male counterparts. These issues need to be discussed, and the experiences of women who work in the field must be shared. This book highlights the important role of Latin American women in IT by collecting and disseminating their frontier-research contributions in order to provide more visibility and inspire greater participation of Latin American women within the major field of computer science. With chapters contributed by female authors from eight Latin American and Caribbean countries, the book provides a deep analysis of these women’s trajectory paths to high quality theoretical and applied relevant research in computer science and IT. While highlighting areas such as inclusivity and STEM education, along with advancements and achievements in topics that include nonverbal interaction in virtual reality, fuzzy logic applications in education, and ant colony optimization, this book is ideal for professionals, academics, students, and researchers working in the fields of information technologies and computer science as well as those interested in gender and women’s studies.

Front Cover.
Title Page.
Copyright Page.
Advances in Human and Social Aspects of Technology (AHSAT) Book Series.
Dedication.
Editorial Advisory Board.
Table of Contents.
Detailed Table of Contents.
Foreword.
Preface.
1: From Sociology to ICTs: A Non-Random Path.
2: Technological Development for the Inclusion of People With Disabilities: Some Experiences at the Universidad Católica del Norte, Chile.
3: Striving for Inclusion in E-Learning and E-Health.
4: Development of Teaching-Learning Strategies Through Technology.
5: Leveraging Linked Data in Open Education.
6: Fuzzy Data Warehouse in the Field of Education.
7: Innovation and Creativity in Software Engineering Education.
8: Lessons Learned About Gamification in Software Engineering Education.
9: Boosting the Competitiveness of Organizations With the Use of Software Engineering.
10: Software Architecture: Developing Knowledge, Skills, and Experiences.
11: Developing a Model and a Tool for the Formation of Project Teams.
12: Connecting the Dots Between Human Factors and Software Engineering.
13: How Do We Interact in Collaborative Virtual Reality? A Nonverbal Interaction Perspective.
14: Virtual Reality in Object Location.
15: An Overview of Applications of Artificial Intelligence Using Different Techniques, Algorithms, and Tools.
16: Data Science Process for Smart Cities.
17: Railway Engineering: Timetable Planning and Control, Artificial Intelligence and Externalities.
Compilation of References.
About the Contributors.
Index.