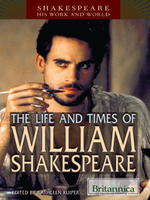 The Life and Times of William Shakespeare, 1st Edition

As with many writers before and since, William Shakespeare was influenced by the events that took shape all around him. Sweeping changes to England’s politics, language, and culture that took place during his lifetime were the fertile ground from which the Bard drew inspiration. Shakespeare’s life is surveyed and the social context in which he created his greatest drama and poetry is examined.