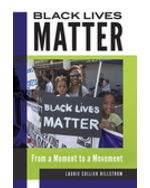 Black Lives Matter: From a Moment to a Movement, 1st Edition

This much-needed reference places the Black Lives Matter (BLM) movement within the broader context of the African American struggle for equality in America, from the civil rights movement of the 1950s and 1960s to the violent protests against white supremacy in Charlottesville in 2017. Specific topics include the fatal shooting of Trayvon Martin in Florida in 2012, which gave rise to the hashtag #BlackLivesMatter; the fatal shooting of Michael Brown in Ferguson, Missouri, in 2014, which launched the rise of the movement; and the fatal shootings of police officers in Dallas and Baton Rouge in 2016, which sparked bitter backlash. It also covers the virulent alt-right backlash against BLM and the ways in which BLM leaders are responding to the challenge. Ten biographical snapshots cover key individuals involved with the movement, and eight primary source documents further illuminate issues discussed in the text. Includes timeline, annotated bibliography, and subject index.