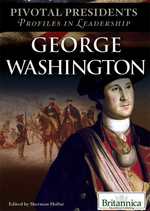 Although more than 200 years have passed since the death of the first U.S. president, the name George Washington still invokes deep patriotism and pride in the country he helped found. A leader on the battlefield as well as the halls of politics, Washington was a crucial figure during the American Revolution who helped define the American presidency, as we know it. Readers trace the life of the man known as the Father of the His Country, from his childhood to his military successes through his tenure as president.