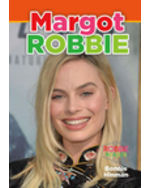 Margot Robbie is an Australian actress and film producer. Robbie knew she wanted to be an actress when she was fifteen. Before moving to the U.S., Robbie acted in a long-running Australian TV show. Her Hollywood breakthrough came when she worked with Leonardo DiCaprio in The Wolf of Wall Street. Robbie continues to star in movies while she looks to become one of Hollywood's most promising producers. Readers will find out about all facets of the life and career of this popular superstar.