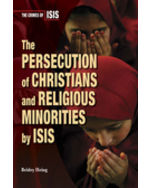 The Crimes of ISIS: The Persecution of Christians and Religious Minorities by ISIS, 1st Edition

The world leapt to action in 2014 when it learned that 50,000 members of a Christian minority group were trapped and starving on the side of a mountain, having been driven from their homes by ISIS soldiers. These Christians are not the only minorities caught in the destructive path of ISIS; Jews and Zoroastrians have also been persecuted, as have more permissive sects of Muslim believers. While many have fled, others have been offered a choice: convert to Islam, pay a tax, or die. This book explores how the rise of ISIS has influenced religious minorities caught in the so-called caliphate and what their lives are like under this oppressive regime.