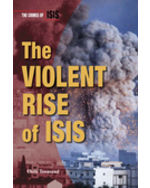 The Crimes of ISIS: The Violent Rise of ISIS, 1st Edition

On July 5, 2014, after the stunning seizure of Mosul, Iraq, a relatively unknown man in black stepped into an Iraqi mosque and declared the reestablishment of The Caliphate, an Islamic body of governance not seen since the early days of the religion. Large swathes of Iraq and Syria have been swept under a medieval wave of violence, and groups as far away as Nigeria and Indonesia have pledged their loyalty to the Islamic State, waging their own campaigns of violence. This book charts the group's violent history, from the first signs of an emerging new jihadist group to the official declaration of the Caliphate, and tracks their use of violence as they seek power and dominance over the world's 1.5 billion Muslim practitioners.