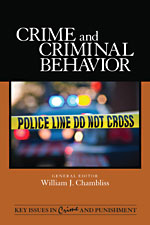 Crime and Criminal Behavior delves into such hotly debated topics as age of consent, euthanasia and assisted suicide, gambling, guns, internet pornography, marijuana and other drug laws, religious convictions, and terrorism and extremism. From using a faking I.D. to assaulting one's domestic partner to driving drunk, a vast array of behaviors fit into the definition of criminal. The authors of these 20 chapters examine the historical contexts of each topic and offer arguments both for and against the ways in which legislators and courts have defined and responded to criminal behaviors, addressing the sometimes complex policy considerations involved. Sensitive subjects such as hate crimes are addressed, as are crimes carried out by large groups or states, including war crime and corporate crime. This volume also considers crimes that are difficult to prosecute, such as Internet crime and intellectual property crime, and crimes about which there is disagreement as to whether the behavior harms society or the individual involved (gun control and euthanasia, for example).