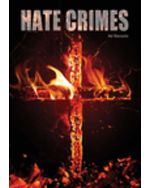 Crimes committed against people because of their race, ethnicity, or religion have become common in the United States and other countries—in 2016, the FBI said more than six thousand such crimes were committed in America. Hate crimes can range from small acts of vandalism to horrific mass shootings, such as the 2015 murders of nine African Americans attending church services in Charleston, South Carolina. Although many laws have been written to prevent hate crimes, experts agree such offenses will never go away as long as people harbor prejudices against others.

Front Cover.
About the Author.
Copyright Page.
Contents.
Introduction: A Callous Hatred.
1: How Serious a Problem Are Hate Crimes?.
2: How Are People Hurt by Hate Crimes?.
3: How Do Laws Address Hate Crimes?.
4: The Challenges of Bringing Perpetrators to Justice.
5: What Can Be Done About Hate Crimes?.
Source Notes.
Organizations To Contact.
For Further Research.
Index.