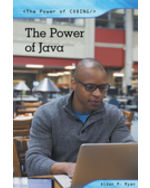 It is incredible to think that a programming language developed in 1995 in response to the shortcomings of the prevalent language at the time, C, remains one of the world's most popular coding languages more than twenty years later. This is the ongoing legacy of Java, which is hailed as easy to use for a variety of goals and an important part of today's technology. This book traces the evolution of the language and explains how the language works and what it's used for, including Java's role in big data and the internet of things.