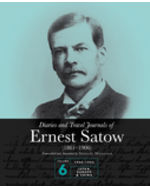 Sir Ernest Mason Satow (1843–1929) was a legendary British diplomat, a key figure in East Asia and Anglo-Japanese and -Chinese relations, particularly in Bakumatsu (1853–1867) and Meiji Era Japan, and in China after the Boxer Rebellion. He also served in Siam (present-day Thailand), Uruguay, and Morocco, and represented Britain at the Second Hague Peace Conference in 1907.