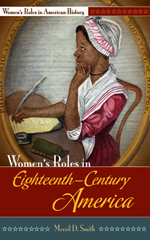 It was a time of transition as the British colonies in North America gradually, then suddenly, moved toward independence. It was also a time of transition for American women - those whose lives were centered around the domestic responsibilities of home and family, as well as those who were branching out into roles once exclusively male. Spanning the broad spectrum of Colonial-era life, WOMEN'S ROLES IN EIGHTEENTH-CENTURY America is a revealing exploration of how eighteenth-century American women of various races, classes, and religions were affected by conditions of the times - war, slavery, religious awakenings, political change, perceptions about gender - as well as how they influenced the world around them." "Women's Roles in Eighteenth-Century America covers the area of North America that became the United States and follows the transformation of the British colonies into a new nation. The book is organized thematically to examine marriage and the family, the law, work, travel, war, religion, and education and the arts. Each chapter combines current research and primary sources to offer authoritative portraits of real lives of the everyday women during this pivotal early era in our history.