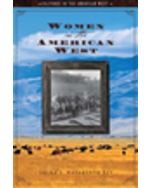 Twenty years after many Western historians first turned their attention toward women, WOMEN IN THE AMERICAN WEST synthesizes the development of women's history in the region, introduces readers to current thinking on the real experiences of Western women, and explores their influence on the course of expansion and development since the 19th century. WOMEN IN THE AMERICAN WEST offers vivid portrayals of women as pioneers, prostitutes, teachers, disguised soldiers, nurses, entrepreneurs, immigrants, and ordinary citizens caught up in extraordinary times. Organized chronologically, each chapter emphasizes important themes central to gender and women's history, including women's mobility, women at home, wage labor, immigration, marriage, political participation, and involvement in wars at home and abroad. With this revealing volume, readers will see that women had a far more profound effect on the course of history in the Western United States than is commonly thought.