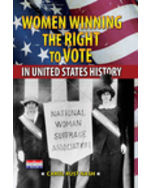 The suffrage movement was the fight for the right of women to vote. Highlighting the lives and careers of notable suffragists like Susan B. Anthony, Elizabeth Cady Stanton, Carrie Chapman Catt, and Alice Paul, author Carol Rust Nash traces the movement's roots from the temperance and abolition movements through its success with the passage of the Nineteenth Amendment. The author describes the many tactics used to fight for the right to vote for women, as well as the many problems and setbacks faced by the women and men involved in the movement. This book is developed from The Fight for Woman's Right to Vote in American History to allow republication of the original text into ebook, paperback, and trade editions.