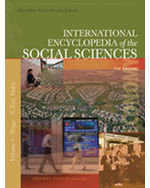 The entirely new International Encyclopedia of the Social Sciences covers scholarship and fields that have emerged and matured since the publication of the original international edition. Like its predecessors, the set meets the needs of high school and college students, researchers inside and outside academia, and lay readers in public libraries.

The new 2nd edition also features biographical profiles of the major contributors to the study of the social sciences, past and present.

Highlights of the new set include:

"Every one of the 2,990 articles of this encyclopedia was newly commissioned and composed by an expert in the field...with its broader topics and an aim for the general reader, the new IESS, is a more suitable introductory tool for high school and public library audiences. Yet with its scholarly coverage of a wide range of topics, from alpha males and the American dream to zero population growth and Zionism, the IESS is also an excellent, affordable option for academic libraries." --Lawrence Looks at Books, July 2008

"An extensive general index is included in the final volume. The encyclopedia includes a larger number of 'see' references than is typical, which will probably aid readers in locating their topics. --Reference & Research Book News, February 2008