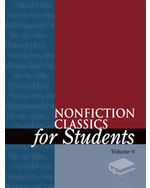 This volume of Nonfiction Classics For Students contains easily accessible and content-rich discussions of the literary and historical background of 14 works of nonfiction from various cultures and time periods. Each work included was specially chosen by an advisory panel of teachers and librarians — experts who have helped us define the information needs of students and ensure the age-appropriateness of this reference’s content. Within the pages of Nonfiction Classics for Students, young researchers will discover everything they need to complete homework assignments and lead classroom discussions.

See Table of Contents for a list of works that appear in this volume. Please note that the entire For Students series is available in eBook format.

Bengali Harlem and the Lost Histories of South Asian America, by Vivek Bald.
The Boy Who Harnessed the Wind, by William Kamkwamba and Bryan Mealer.
The Devil’s Highway, by Luis Alberto Urrea.
Educated, by Tara Westover.
Hidden Figures: The American Dream and the Untold Story of the Black Women Mathematicians Who Helped Win the Space Race, by Margot Lee Shetterly.
I Am Malala, by Malala Yousafzai and Christina Lamb.
The Immortal Life of Henrietta Lacks, by Rebecca Skloot.
Letter from Birmingham City Jail, by Martin Luther King Jr.
A Long Way Gone: Memoirs of a Boy Soldier, by Ishmael Beah.
Nickel and Dimed: On (Not) Getting By in America, by Barbara Ehrenreich.
Outliers: The Story of Success, by Malcolm Gladwell.
Reading Lolita in Tehran, by Azar Nafisi.
Red Scarf Girl: A Memoir of the Cultural Revolution, by Ji-li Jiang.
We Should All Be Feminists, by Chimamanda Ngozi Adichie.