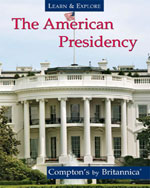 The American Presidency, updated for 2013, provides a rich journey through U.S. history. Meet the occupants of the nation's highest office from George Washington to Barack Obama. Each presidential summary includes a detailed biography, the president's signature, his vice president(s), a profile of the first lady, and timelines. Coverage of the recent 2012 presidential election and information describing the Cabinet, the White House, election results, the presidential flag, and the presidential seal history are also included. Current events such as the recent economic recession, financial reform bill, health care reform, ending the war in Iraq, Libya and Muammar al-Qaddafi, and Osama bin Laden are all chronicled in this title.