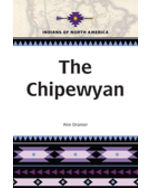 The Chipewyan, part of the Indians of North America series, presents a fascinating portrayal of the history and culture of these native people. The Chipewyan traditionally inhabited the taiga of northern Canada, where despite the harsh climate they established a thriving, self-sufficient society. A nomadic people, the Chipewyan traveled from season to season to best exploit the animals in the region, especially caribou. With the arrival of European fur traders in northern Canada, many Chipewyan abandoned the caribou hunt in favor of hunting fur-bearing animals for trade. In 1975 the Chipewyan and other Athabaskan tribes of North Canada joined together to form the Dene Nation, demanding greater control of their affairs and the natural resources of their territories. Today the Chipewyan are still in the process of reconciling their culture with the demands of Euro-Canadian society.

Front Cover.
Copyright Page.
Chapters.
1: Caribou Hunters.
2: Strategies for Survival.
3: The Chipewyan Cycle of Life.
4: The Arrival of the Europeans.
5: The Legacy of Thanadeltur and Matonabbee.
6: Unequal Partners.
7: The Big Three.
8: At the Crossroads.
Support Materials.
Bibliography.