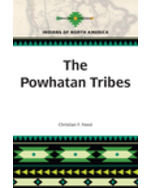 The Powhatan Tribes, part of the Indians of North America series, presents a fascinating portrayal of the history and culture of these native people. About 30 Indian groups came under the rule of Chief Powhatan in the late 1500s. The tribe gained fame when Powhatan's daughter Pocahontas allegedly saved the life of colonial leader John Smith. Facing the same fate as many tribes, the Powhatan people lost their land and suffered under discriminatory laws. Today, several Powhatan groups continue to live on a reservation.

Front Cover.
Copyright Page.
Chapters.
1: “Before Jamestown”.
2: “People of the Tidewater”.
3: “Powhatan, Pocahontas, and Peace”.
4: “Opechancanough's Wars”.
5: “Strangers in Their Own Land”.
6: “Matters of Red, White, and Black”.
7: “Separation and Survival”.
8: “Living in a Different World”.
Support Materials.
Bibliography.