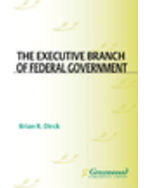 How has the role of the president changed since George Washington? How does the president interact with Congress? The courts? The states? Other nations? These are just a few of the overarching questions addressed in this volume in ABC-CLIO's About Federal Government set devoted to the president and the executive branch he manages. The Executive Branch of the Federal Government provides a brief history of the presidency, then looks at the constitutional powers of the office, the day-to-day functions of the federal bureaucracy, general elections, and presidential relationships with Congress and the courts. But perhaps most compelling are the insights into the officeholders themselves, the individuals who have served as president, each fashioning a term reflective of his own personality.