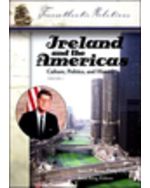 Ireland and the Americas: Culture, Politics, and History, 1st Edition

Nearly 200,000 Irish immigrants and Irish-Americans fought in the American Civil War. Today, the American Ireland Fund, a nonpolitical and nonsectarian fund, has raised more than $200 million for over 1,000 projects in Ireland. On a proportional basis, no other ethnic group has proven more inclined to emigrate or appears more widely scattered across the American continents than the Irish.

Ireland and the Americas: Culture, Politics, and History aims to broaden the traditional notion of 'Irish-American' beyond Boston, New York and Chicago. In additional to full coverage of Irish culture in those settings, it reveals the pervasive Irish influence in everything from the settling of the American West, to the spread of Christianity throughout the hemisphere, to Irish involvement in revolutionary movements from the American colonies to Mexico to South America.

In addition, the encyclopedia shows the profound impact of Irish Americans on their homeland, in everything from art and literature informed by the emigrant experience to efforts by Irish Americans to influence Irish politics. Ranging from colonial times to the present, and informed by the surge of academic interest in the past 30 years, Ireland and the Americas is the definitive resource on the profound ties that bind the cultures of Ireland, the United States, Canada, and Latin America.