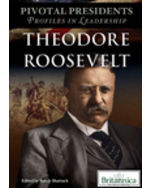 When he was sworn in as US president in 1901 after the assassination of William McKinley, Theodore Roosevelt was the youngest man ever to hold the office. He was a statesman, cowboy, soldier, hunter, naturalist, and explorer. In 1904, he was elected president by a triumphant majority. This biography delves into his time in office, during which he passed legislation to regulate big business, got broad control of railroads, conserved natural resources, and worked to break up industrial monopolies. In foreign policy, he brought about a peace conference between Russia and Japan and was awarded the Nobel Peace Prize.