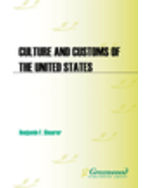 Culture and Customs of the United States, 1st Edition

When immigrants migrated to the Land of Opportunity, they brought with them pieces of their own heritage: foods, religions, holidays, festivals, music, and art, just to name a few. Through time, these customs have developed into what we now know as American life. Explore how even within the U.S., various cultures and customs differ from New England to the Midwest to the Pacific. Discover how many religions are practiced all over the country, and how each sect differs in its celebration.

Readers will learn about American holidays — religious, federal, and even those fabricated by Hallmark and television! Sports, leisure activities and fashion also play a major role in American culture, as discussed in this all-encompassing work. Discover how American cuisine has evolved from other cultures, such as Italian, Greek, Mexican, Chinese, Indian, and West Africa, and how each region has its own indigenous dishes, including New England clam chowder, Southern jambalaya, and Mid-western lutefisk.

Contemporary and classic literature is also discussed, along with the evolution of poetry. Readers will learn about the development of mass media, as well as the growth of cinema and films from the first silent film to today's popular blockbuster trilogy Pirates of the Caribbean. Music and dance are also discussed in detail, covering the New York Philharmonic to Woodstock. Contemporary art and architecture is discussed as well as types of housing across all the regions of the U.S.

This unique two-volume addition to the Culture and Customs of the World series gives high school students, both national and international, the chance to examine the United States from the outside in. The mosaic of American culture comes to life in this expansive yet detailed study of what makes the United States a complex blend of customs and traditions.