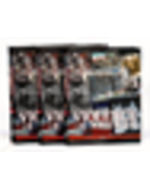 This important 3-volume set unravels societal issues so that readers can examine and study various forms of violence in America from many different perspectives. In 600 A-Z articles, illustrated with over 300 photos, charts, and maps, the Encyclopedia addresses criminal justice issues, violence in the media, historical acts of violence, and the cultural and biological roots of violence. Biographies of over 100 Americans associated with violence are also featured.

"An interdisciplinary reference work that seriously examines the historical, psychological, and biological aspects of violence in order to better understand and deal with the all too commonplace contemporary violent behavior...The volume has all the features of a well-conceived and conscientiously executed reference work for researchers on the secondary and post-secondary level. Highly recommended for reference collections in all secondary or post-secondary libraries. A landmark work." -- Catholic Library World (June 2000)

"This is a very nicely done encyclopedia with a carefully constructed index, bibliographies, some 350 photographs, and useful appendixes. The well-written and informative entries are an excellent starting point for high school and college research projects...Violence in America is highly recommended for academic, high school, and public libraries."-- Library Journal (April 15, 2000)

"Gr 10 Up -- A comprehensive study covering the years 1622 to 1999. The set opens with a preface that defines the scope of this broad work and a lengthy opening essay. Entries include overviews of the different kinds of violence and major essays dealing with larger issues, such as violence in sports and how violence is represented in art...On the whole, the 595 well-written articles, authored by experts in their fields, are full of useful information, including charts and statistics. Each one has a significant bibliography and useful cross-references. This is an interdisciplinary work...A solid, stimulating set." -- School Library Journal (November 2000)

"This encyclopedia attempts to explore the subject of violence by exposing all aspects of its nature, offering readers an 'unprecedented inventory of what scholarship and research now know about violence in America.' Its definition of violence includes, as with the Kitty Genovese case, injury inflicted on a person but stretches to cover injuries inflicted on people against animals, the natural environment, or property. The injury may be physical or emotional, legal or criminal, intentional or not. Some of the more than 600 entries written by 444 contributors cover people...Other entries treat violence not by looking at individuals but by covering specific events, social conditions, and cultural trends...A third type of entry treats concepts, summarizing and explaining the current research on Capital punishment, Mass murder, Nonviolence, Suicide, and more. Approximately 30 major essays, some as long as 12,000 words, examine broad topics such as Alcohol and alcoholism and Sport. This unique source is highly recommended. It manages to maintain a scholarly balance between attention-grabbing detail and reflective analysis. Perhaps its most engaging feature is simply the juxtaposition of its varied but related topics. Video games, military interventions, corporal punishment, abortion, and racial unrest are all brought together in a solid exploration of a disturbing topic. Violence in America deserves a place in academic and public-library collections." -- Booklist (June 1 & 15, 2000)

"I found myself grateful to Gottesman, Brown, and their colleagues for assembling signed entries that, cumulatively, bring us closer to the tantalizing and always impossible prospect of apprehending America through an understanding of one of its most persistent traits." -- Los Angeles Times (January 7, 2001)

"A well-written, profusely illustrated and generously referenced three-volume encyclopedia that allows us, simultaneously, to access numerous aspects of the subject in alphabetical order and to approach, however tentatively, a systematic understanding of a field as unwieldy as violence."-- Los Angeles Times (January 7, 2001)

"This superlative reference source addresses all aspects of violence in the United States, historical and current, from Internet violence to the Columbine shooting. … This set is authoritative, comprehensive, current, and worth the price. It supersedes any material a high school library would have on this topic. Highly recommended." — The Book Report (September/October 2000)

"Violence is everywhere. It is on our streets, in our schools and in our living rooms. So it should come as no surprise that now there is an encyclopedia that documents it. Scribner's Violence in America: An Encyclopedia is a three-volume set which exposes some of the worst of our history. But this set is not merely a recounting of disturbing events. Editor Ronald Gottesman and his contributors treat violence in America as the complicated and multi-dimensional force that it is...Overall, the writing is unadorned and straightforward with each article being signed and containing a useful bibliography. There is also a contents list for all three volumes, a chronology, an overview essay that introduces the set and a thorough, 90-page index providing access to specifics. Violence in America is a subject encyclopedia that will have broad appeal. It is a serious and scholarly treatment that will be of value to students and lay readers alike. Its relevance and production values make it a worthy addition for undergraduate and large public libraries." -- Against the Grain ( April 2000)

"This three-volume reference comprises 595 articles written by leading historians, psychologists, anthropologists, folklorists, sociologists, criminologists, and medical researchers. In addition to biographies of significant individuals, they present information relating to violence in historical and contemporary American society...Arranged alphabetically, entries range from overviews up to 12 pages to succinct summaries of less than a page. Other features include about 350 b&w illustrations, sidebars, and an eight-page chronology." -- www.booknews.com ((Portland, OR)

"For the most part the entries are succinct and well-informed, touching on a variety of significant issues without obviously exhausting them and furnishing bibliographies for further exploration. In general, too, there's a nice tone of distance rather than detachment that allows the sensational side of violence its due without making it the whole story. The overviews by W. J. T. Mitchell on the Representation of Violence, by Charles Wolfe on Film, and by Nick Browne on the Aesthetics of Violence are only a few of the many excellent essays here...My only mild caveat would be that, although the primary bent of this vast work is historical and sometimes even theoretical, there is a perhaps unavoidable but still definite tilt toward the most famous violences of the recent past...But this occasional presentness is a small price to pay for the many riches and insights of Violence in America. Most reference books codify pre-existing ideas and information, but this one has created a field of vision." -- Film Quarterly

"Remarkable breadth of coverage and incisive articles make this encyclopedia an excellent resource on the topic of violence in this country...Violence in America's almost 600 entries by more than 400 contributors are enhanced by sidebars, charts, graphs, and more than 400 black-and-white photographs. Appendixes list Web resources, publications, and organizations for further information. Well researched and clearly written, this impressive work would be a superb resource for reports, papers, and reference questions for those in high school or older." -- VOYA (Voice of Youth Advocacy) ( February 2001)