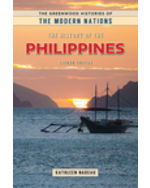 
The History of the Philippines, 2nd Edition

This updated, expanded edition dives deeper into this island nation's history and explores the recent political, cultural, and environmental events of the last decade. Readers will find a wealth of information on pre-colonial and post-colonial historical periods, covering the Philippines' earliest inhabitants. Also covered are the modern tyrannical periods of the Marcos dictatorship and President Duterte's controversial war on drugs, as well as the more optimistic and promising presidencies in between. Among the many topics covered in this new edition are the feminization of outmigration that peaked at the end of the 20th century, globalization and the spread of export processing zones, and the impact of the call center culture coupled with that of the overseas diaspora on the changing structure of the traditional family. Ideal for high school and undergraduate readers, this volume includes expanded and new chapters, as well as an updated timeline and annotated bibliography.