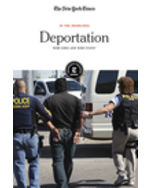 In the Headlines: Deportation: Who Goes and Who Stays?, 1st Edition

One of the major issues occupying today's headlines is immigration, and especially, who should be allowed to come to the United States and who should be forced to leave through the process of deportation. Exploring this issue means not only looking at the experiences of immigrants, but also the repercussions of barring certain groups of people on the basis of religion or fear. From building a wall between Mexico and the United States, to the fate of children separated from their parents when they have illegally entered the country, these issues fill U.S. headlines every day.

Front Cover.
Title Page.
Copyright Page.
Contents.
Introduction.
Immigration Controversy.
1: Trump Supports Plan to Cut Legal Immigration by Half.
2: White House Pressed Unsuccessfully to End Immigration Program.
3: Stoking Fears, Trump Defied Bureaucracy to Advance Immigration Agenda.
4: Trump Sets Up a Grand Bargain on Immigration.
5: Is America a ‘Nation of Immigrants’? Immigration Agency Says No.
6: A Twitter Rant That Rails and Misleads on Immigration Policy.
Who Should Go?.
7: New Trump Deportation Rules Allow Far More Expulsions.
8: Only Mass Deportation Can Save America.
9: Prosecutors’ Dilemma: Will Conviction Lead to ‘Life Sentence of Deportation’?.
10: A Game of Cat and Mouse With High Stakes: Deportation.
11: About 2,500 Nicaraguans to Lose Special Permission to Live in U.S..
12: Being Deported From Home for the Holidays.
13: Immigration Agents Target 7-Eleven Stores in Push to Punish Employers.
14: ICE Deportation Cases: Your Questions Answered.
15: Justice Dept. Restricts a Common Tactic of Immigration Judges.
16: What to Expect as the House Heads Toward an Immigration Showdown.
Debating Who Should Stay and the Dreamers.
17: The Road, or Flight, From Detention to Deportation.
18: Is It Possible to Resist Deportation in Trump’s America?.
19: In a ‘Sanctuary City,’Immigrants Are Still at Risk.
20: The Americans Left Behind by Deportation.
21: Manhattan Church Shields Guatemalan Woman From Deportation.
22: A Marriage Used to Prevent Deportation. Not Anymore.
23: Immigrants Claim Lawyers Defrauded Them and They May Be Deported.
24: Trump Moves to End DACA and Calls on Congress to Act.
25: Dreamers’ Fate Is Now Tied to Border Wall and Other G.O.P. Immigration Demands.
26: For Immigrant Students, a New Worry: A Call to ICE.
27: Judge Upholds Order for Trump Administration to Restore DACA.
Families at the Border.
28: Hundreds of Immigrant Children Have Been Taken From Parents at U.S. Border.
29: Trump Administration Threatens Jail and Separating Children From Parents for Those Who Illegally Cross Southwest Border.
30: Did the Trump Administration Separate Immigrant Children From Parents and Lose Them?.
31: More Than 450 Migrant Parents May Have Been Deported Without Their Children.
32: Migrant Families Have Been Reunited. Now, a Scramble to Prevent Deportations.
Global Impact.
33: Nations Hinder U.S. Effort to Deport Immigrants Convicted of Crime.
34: Migrants Confront Judgment Day Over Old Deportation Orders.
35: Pain of Deportation Swells When Children Are Left Behind.
36: Deportation a ‘Death Sentence’ to Adoptees After a Lifetime in the U.S..
37: From Offices to Disney World, Employers Brace for the Loss of an Immigrant Work Force.
38: When Migrants Are Treated Like Slaves.
39: Deported, and Sticking Out: ‘This Ain’t Home. America’s My Home.’.
40: Deporting the American Dream.
Glossary.
Media Literacy Terms.
Media Literacy Questions.
Citations.
Index.