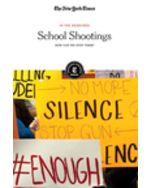 In the Headlines: School Shootings: How Can We Stop Them?, 1st Edition

Shootings on campus have become one of the greatest and most frequent tragedies of our time. They endanger the welfare of students, teachers, and school staff, shatter communities, and provoke fierce debate about Second Amendment rights and gun control legislation. In this collection of articles, readers will encounter the best of The New York Times's reporting on this sad but common event, including a survey of the history of school shootings in the United States and reflections on why they've become a political hot-button topic. Through these pieces, readers are exposed to the many sides of the debate that rages against a backdrop of senseless violence against young people and educators.

Front Cover.
Title Page.
Copyright Page.
Contents.
Introduction.
The University as Battleground.
1: 1966: ‘The Time has Come for Action’.
2: University of Texas to Reopen Clock Tower Closed after Suicides.
3: 4 Kent State Students Killed by Troops.
4: Virginia Tech Shooting Leaves 33 Dead.
5: At Virginia Tech, Remembering While Moving On.
6: How Many More Warnings?.
7: When the Group is Wise.
Columbine: The Modern School Shooting Era.
8: Terror in Littleton: 2 Students in Colorado School Said to Gun Down as Many as 23 and Kill Themselves in a Siege.
9: In the New West, Violence is Real.
10: The Columbine Killers.
11: When Columbine is Invoked, Fears Tend to Overshadow Facts.
12: Columbine Shocked the Nation. Now, Mass Shootings are Less Surprising..
13: The Virginia Shooter Wanted Fame. Let's Not Give It to Him..
Sandy Hook: Redefining the Possibilities of Violence.
14: Nation Reels after Gunman Massacres 20 Children at School in Connecticut.
15: Children Were All Shot Multiple Times with a Semiautomatic, Officials Say.
16: ‘Who Would Do This to Our Poor Little Babies’.
17: Nation's Pain is Renewed, and Difficult Questions are Asked Once More.
18: After Sandy Hook, More Than 400 People Have Been Shot in Over 200 School Shootings.
19: Parkland: New Tragedy, New Politics.
20: As Shots Ring Out, a Student Texts: ‘If I Don't Make It, I Love You’.
21: The Names and Faces of the Florida School Shooting Victims.
22: Reporting on a Mass Shooting, Again.
23: ‘How Did This Happen?’: Grief and Fury after Florida Shooting.
24: For Parents of Shooting Victims, a Support Network That Keeps Growing.
25: Scared but Resilient, Stoneman Douglas Students Return to Class.
26: My Teachers at Marjory Stoneman Douglas Saved Lives.
27: In School Shooting's Painful Aftermath, Sheriff Faces Questions Over Police Response.
28: The Things We Know About School Shooters.
29: Tipster's Warning to F.B.I. on Florida Shooting Suspect: ‘I Know He's Going to Explode’.
30: The Boys Are Not All Right.
31: N.R.A. Chief, Wayne LaPierre, Offers Fierce Defense of 2nd Amendment.
32: Florida Legislator's Aide is Fired after He Calls Parkland Students ‘Actors’.
33: Trump Finds Unlikely Culprit in School Shootings: Obama Discipline Policies.
34: Should Teachers Carry Guns? Are Metal Detectors Helpful? What Experts Say.
35: Letting American Kids Die.
The Future: Student Action Shaping the Debate.
36: A ‘Mass Shooting Generation’ Cries Out for Change.
37: National School Walkout: Thousands Protest Against Gun Violence Across the U.S..
38: Florida Shooting Survivor Wants Action: ‘We're Children. You Guys are the Adults.’.
39: Don't Let My Classmates’ Deaths Be in Vain.
40: Will America Choose Its Children Over Guns?.
41: As Victims are Mourned in Florida, a Search for Solace, and Action.
42: Parents and Students Plead With Trump: ‘How Many Children Have to Get Shot?’.
43: In Wake of Florida Massacre, Gun Control Advocates Look to Connecticut.
44: Get Out of Facebook and Into the N.R.A.'s Face.
45: I Interned for Senator Rubio. Now I'm Begging Him to Act on Guns..
46: Dear National Rifle Association: We Won't Let You Win. From, Teenagers..
47: Florida Students Began With Optimism. Then They Spoke to Lawmakers..
48: Outspoken and Precocious, Florida Students Struggle with Loss When the Cameras Turn Off.
49: Major Shootings Led to Tougher Gun Laws, but to What End?.
50: ‘We Should Not Have This in Common’: Santa Fe and Parkland Students React to Shooting.
Glossary.
Media Literacy Terms.
Media Literacy Questions.
Citations.
Index.
About The New York Times Company.