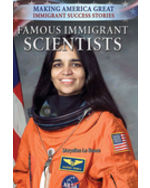 The United States has been the one of the world leaders in scientific discovery for almost a century, and that is due in no small part to the contributions of immigrants. Yet new arrivals to the country have always faced some measure of hostility and suspicion, despite the fact that American success continues to be built on the backs of immigrants. This volume looks at the scientific achievements of early immigrants, from Joseph Priestley and Nikola Tesla to Enrico Fermi and Albert Einstein, as well as the contributions of modern immigrant scientists from every continent.

Front Cover.
Half Title Page.
Title Page.
Copyright Page.
Contents.
Introduction.
1: Whose Land Is It Anyway? A Short History of US Immigration.
2: Early Immigrant Scientists in Chemistry and Electricity.
3: Immigrants Who Ushered in the Atomic Age.
4: Immigrants in Medicine.
5: Immigrant Biologists.
6: Immigrant Astronauts.
7: Immigrants at the Frontiers of Science and Technology.
Chapter Notes.
Glossary.
Further Reading.
Index.
About the Author.