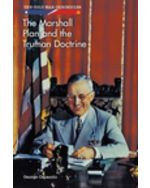 The Cold War Chronicles: The Marshall Plan and the Truman Doctrine, 1st Edition

The growth of Soviet power prompted concern from the United States. President Truman asserted that the United States needed to prevent Communism from becoming stronger. His warning to Congress became known as the Truman Doctrine. When General George Marshall visited Europe, he feared that Europe's weak economy would encourage the growth of Communism. He established an initiative to provide economic support to rebuild Europe, which had been devastated by the war. This initiative was nicknamed the Marshall Plan. Congress was reluctant at first but ultimately approved the plan when Czechoslovakia became Communist in 1948. This book gives an in-depth discussion of European integration and the influence of Communism on Western Europe.