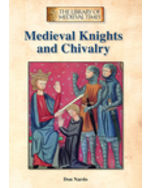 After Rome's fall, some of the medieval European kingdoms that rose upon its wreckage maintained units of mounted warriors. Over time, elite individuals in the ranks of those units gained fame as knights—fighters of exceptional skill and courage, whose armor grew to cover their entire bodies and who also enjoyed high social status. Knights took an oath to serve God and their king and developed a special code of honorable behavior called chivalry, which, regrettably for their victims, they did not always follow.

Front Cover.
About the Author.
Copyright Page.
Contents.
Important Events of Medieval Times.
Introduction: An Ongoing Fascination for Knights.
1: The Rise of the Medieval Knight.
2: The Height of Knights in War and Society.
3: Code of Chivalry: Ideal Versus Reality.
4: Chivalry Flaunted: Tournaments and Heraldry.
5: Knights' Demise and Their Legacy.
Source Notes.
For Further Research.
Index.
Picture Credits.