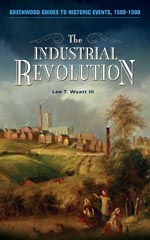 "This volume offers a comprehensive look at what some historians call one of the seminal events in the history of man. The first three chapters set the stage, reviewing the historical perspectives and ongoing debates about the industrial revolution and describing the socio-economic and agricultural conditions in Great Britain preceding large-scale industrial change. While many titles focus exclusively on the industrial revolution in Great Britain or America, this volume devotes four separate chapters to these two countries in addition to Europe and the world beyond the West. Following these chapters is a section of three to four page biographies on 15 people who made important contributions to the Industrial Revolution and a set of 21 primary source documents, among them government reports, period journal articles, poetry and literary excerpts. An annotated bibliography of digital and print resources and a general index complete the volume. The global view of the industrial revolution, along with the primary resource documents and biographies, make this a valuable resource for extending lessons or beginning research on the Industrial Revolution. Highly recommended for high school, public and university libraries."--Doug's Student Reference Room, August 2009