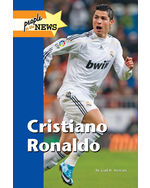 This title in Lucent's People in the News series details the life of soccer player Cristiano Ronaldo. The early chapters talks about the difficulties he faced growing up poor in Mederia, but how as a young child was discovered to be a soccer phenom. Ronaldo was forced to live apart from his family at the early age of ten so that he could pursue his dream of becoming a professional soccer player and he has developed into one of the most popular and richest soccer players in the world.

Introduction: "The Very, Very Best in the World".
Chapter 1: An Island Childhood.
Chapter 2: Club Soccer.
Chapter 3: The Most Expensive Teenager in Britain.
Chapter 4: A Move to Spain.
Chapter 5: Expanding his Reach.