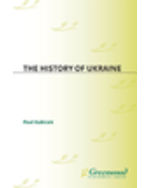 The History of Ukraine, 1st Edition

Ukraine's struggle for a national identity plagued this former Soviet Union state long before the Cold War shook the world. Its central location between Eastern Europe and Western Asia invited many different cultures to settle the land, ultimately populating a powerful early medieval society known as Kievan Rus. However, readers will learn how Kievan Rus's Golden Age quickly crumbled with decades of Mongol invasions, Polish-Lithuanian occupation, and Russian empirical ruling. Explore how Ukraine flirted with independence in the early 20th century, only to be quickly taken over by harsh Soviet rule in 1922. Despite its independence from the USSR in 1991, devastating consequences of the socialist rule have allowed the world to witness Ukraine's ceaseless efforts to attain a stable government, struggling through the poisoning of Viktor Yushchenko, rigged elections, and the Orange Revolution.

Front Cover.
Half Title Page.
Advisory Board.
Title Page.
Copyright Page.
Contents.
Series Foreword.
Preface.
Timeline of Historical Events.
Introduction.
1: Kievan Rus: The Foundation of Ukrainian Culture.
2: The Polish-Lithuanian Period and the Rise of the Cossacks.
3: Ukraine under the Russian Empire.
4: Western Ukraine under the Habsburg Empire.
5: Revolution and the Establishment of Soviet Authority.
6: Ukraine under Soviet Rule.
7: The Drive for Ukrainian Independence.
8: Post-Soviet Ukraine, 1991–2004.
9: The Orange Revolution and Beyond.
Notable People in the History of Ukraine.
Bibliographical Essay.
Index.
About the Author.
Other Titles in the Greenwood Histories of the Modern Nations.