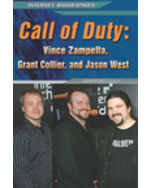 The video-game franchise Call of Duty has earned millions of fans through its realistic, engaging representation of both contemporary and historical wars. The story behind the game's development is just as contentious. Vince Zampella, Grant Collier, Jason West, and their development studio Infinity Ward designed the Call of Duty games, which were then released by the publisher Activision. But after several years, the creators and Activision were engaged in a legal battle over money and rights. This volume details the saga and serves as a cautionary tale for how egos can destroy profitable business relationships.