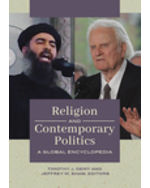 Although there are many books on religion and politics, reference works that consider the two together are few, and most primarily address theory rather than trends. This work does the latter, contextualizing them within regional and national boundaries. In so doing, it recognizes the power of political and religious ideas and movements on individuals, communities, and nations, making it a valuable resource for several disciplines, among them political science, international relations, religion, and sociology. The title focuses on the interplay of religion and politics in countries worldwide with an emphasis on the post-2000s. Organized by geographic region including Africa, the Middle East, and South America and by country alphabetically within each section. Each region has a brief overview of the political-religious dynamics of the area so readers can compare and contrast the dynamics between and among countries in a region. Includes an introduction, sidebars, and bibliography.