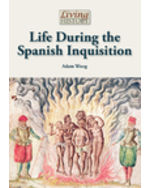 The Spanish Inquisition, which began in the late 1400s, is one of history's most potent examples of religious and cultural persecution. During the Inquisition trials, tens of thousands of non-Christians, notably Jews and Muslims, were tried for alleged crimes against the Catholic Church. These trials involved interrogation, imprisonment, and sometimes torture and execution, destroying families and communities across Spain that had once peacefully co-existed.