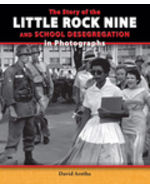 The Story of the Little Rock Nine and School Desegregation in Photographs, 1st Edition

In September 1957, nine brave African-American students attempted to do something that had not been done in the segregated South—integrate a public school. Until 1957, black students could not attend school with white students, and black schools were often inferior to white schools. However, in the face of hatred, protest, and violence, these courageous students, who came to be known as the Little Rock Nine, led the charge for change. Through riveting primary source photographs, author David Aretha examines this critical time in the Civil Rights Movement.