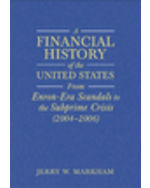 By the author of the critically acclaimed A Financial History of the United States, this reference covers the extraordinary financial developments during the period 2004-2009.

Beginning with a description of the criminal trials from the Enron-era scandals in which the government achieved only mixed success, this reference then examines several corporate governance issues that have been raised as a result of those scandals and their effect on business. Next it describes the ongoing restructuring of the stock and derivative markets and the regulatory responses to the run-up in energy prices. It also examines the rise of private equity and hedge funds and the problems they encountered during the credit crisis that began in 2007. The development of the mortgage market in the United States, including a description of prior problems in that market, is discussed. It then turns to the residential housing boom and bust that led to the subprime crisis, with detailed coverage of the effect of that crisis on financial institutions along with the stock market panic of 2008 and the massive government intervention that sought to prevent another Great Depression. The concluding chapters cover in detail regulations and reform proposals.