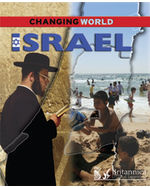 In Israel , part of the Changing World series, students learn since its foundation in 1948, Israel has undergone dramatic changes. As a Jewish state it has welcomed Jews from all over the world, leading to an eight fold increase in its population. This has benefited the Israeli economy and given Israel a rich and diverse culture, but has also brought challenges.