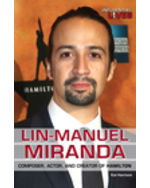 Born in New York City to Puerto Rican immigrant parents, Lin-Manuel Miranda's creativity was influenced by the vibrant city. He began writing his first musical while he was in college and has since gone on to win a Pulitzer Prize, two Grammys, an Emmy, three Tonys, and many other accolades. He is possibly the best-known name in modern theater. Through lively text and bright photos, readers will learn about Miranda’s life, education, and accomplishments, as well as Hamilton, New York City, and Broadway. Quotes from Miranda will allow readers a firsthand look into the mind of America’s most famous modern composer. The Glossary helps readers understand vocabulary, and Further Reading will encourage deeper research.