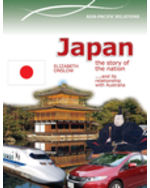 Japan: The Story of the Nation And its Relationship with Australia, 1st Edition

Japan is a nation of modestly sized islands off the coast of Asia. It evolved from a virtual clone of China into a land with a very distinct character. This book shows how Japan was able to fend off the European colonial powers, then manipulate them to suit its needs. This is the story of a militaristic culture determined to realize Japan's destiny no matter what the cost. We see how blind ambition led to a disastrous war that ended in holocaust, humiliation, and occupation by foreign powers. Then, with the help of generous former enemies, Japan rebuilt itself and took on the world by seeing what other countries did and doing it better. Included are details of Australia's relationship with Japan, Japan's government, transport, communications, religion, arts, craft, food and the environment.