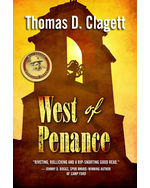 Territory of New Mexico, 1875. Archbishop Jean-Baptiste Lamy needs money to complete the cathedral he's building in Santa Fe. He comes to see Father Clement Grantaire, pastor of a small parish near the Texas border, for help. Father Grantaire has a checkered past, but he also has an idea. Convincing Lamy to give him the few dollars he's collected, Grantaire changes into old clothes and departs for Fort Union, a three-day ride. After a night of gambling, Grantaire wins over a thousand dollars from the soldiers. Riding back to his parish, he's robbed and left for dead. He must tell Lamy about the lost money, until he sees the man who robbed him, and he's wearing a sheriff's badge. How will he get his money?