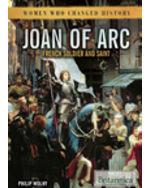 Even centuries after her death, Joan of Arc remains both deeply admired and mysterious. This title recounts her rise from obscurity as the daughter of a tenant farmer to military leadership in the French campaigns against the British in the Hundred Years’ War. It also highlights a strong woman embracing a destiny that, ultimately, meant sacrificing her own life for her faith and nation. The story of this unflinching leader—who remains a French national hero—during an era when women had far fewer freedoms than they do today makes for a lively, informative, and inspiring resource.