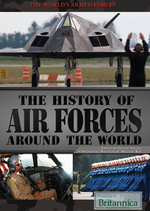 The History of Air Forces Around the World, 1st Edition

The introduction of aircraft to the world’s armed forces helped produce some of the greatest advances in modern warfare and the led to the creation of air forces in many of the world’s militaries. This title’s comprehensive coverage of these developments makes it a must-read for history buffs, military enthusiasts, and fans of aeronautics alike. With specialized content dedicated to the missile age and the use of aircraft in the Persian Gulf, Afghanistan, and Iraq wars, this book is highly relevant for anybody seeking to understand the new types of off-the-ground technologies—including unmanned aerial vehicles—that have become key for armed forces in the 21st century.