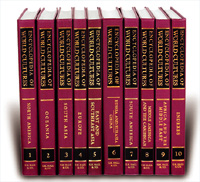 This 10-volume set lists and describes more than 1,500 global cultures. Based on research of social scientists, it is the source for historical, social, political, economic, linguistic, religious, and other information on virtually every existing culture. Its cross-cultural perspective meets high school curricular requirements for world studies and social sciences.

"The first nine volumes of the Encyclopedia of World Cultures are devoted to different regions of the world. Each opens with maps of the region, followed by alphabetically arranged entries on the ethnic groups that live in the area...Volume 10 has three cumulative indexes." -- Booklist/Reference Books Bulletin (June 1, 1996)

"This 1-volume supplement to the 10-volume Encyclopedia of World Cultures, published serially from 1991 to 1996, retains its predecessors' format. It includes approximately 100 entries that concern both cultures and ethnic groups not covered or only very briefly described in the original or who "have been strongly affected by recent political events" (p. xvii) such as the Bosnian Muslims. Articles include ethnonyms, location, demography, linguistic affiliation, history, settlement, economy, kinship, family life, social and political organization, religion, and expressive culture (including medicine), and a bibliography. Each entry is signed and most are written by acknowledged experts. The Supplement includes maps (which lack the cultures' locations), a glossary, country and ethnonym indexes, and a subject index that facilitates cross-cultural comparison The Encyclopedia of World Cultures has become the standard reference source in the field; the Supplement maintains its high standard of scholarship and writing." -- ARBA (January 2003)

"The set fills important gaps in reference literature. The Encyclopedia of World Cultures summarizes the anthropological research on 1,500 groups. [This set] will be a useful addition to academic and public libraries." -- Booklist (June 1996)

"Patrons and staff say 'it's great for intercultural communications, international business, political science, or for people curious about their own ethnic heritages'. And it gives nice bibliographies." -- Wilson Library Bulletin (January 1995)