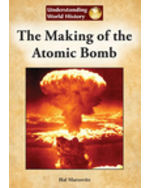 The Making of the Atomic Bomb, 1st Edition

By the early 1900s, physicists developed the science of fission, the ability to create tremendous amounts of energy by splitting the atom. In 1939, as war swept across Europe, President Franklin D. Roosevelt realized that America would soon be drawn into the conflict and the US would be in a race against Germany and Japan to develop the atomic bomb. Under Roosevelt, the Manhattan Project was launched with the goal of developing the atomic bomb and using it to end World War II.