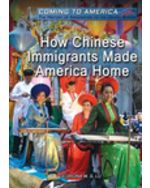 Coming to America: The History of Immigration to the United States: How Chinese Immigrants Made America Home, 1st Edition

Chinese immigrants first reached the shores of California in the mid 1800s. Since then, they have made significant contributions to the American economy through their work in mines, on railroads, and on farms as they earned money to send home. However, many saw them as job-stealing freeloaders. They contributed to American culture too, even as discrimination forced them to build their own communities from the ground up. The Chinese American community had no choice but to take on these stereotypes in order to survive. Written by a Chinese immigrant, readers will discover that even the xenophobia that exists today can be defeated and one's culture celebrated in the United States.