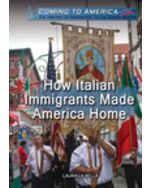 Coming to America: The History of Immigration to the United States: How Italian Immigrants Made America Home, 1st Edition

The Italian mass migration from Italy happened during a period of political and economic upheaval. Many Italian immigrants faced isolation, discrimination, and fear as they worked to learn English and assimilate to their new home. Despite such obstacles, they also created neighborhoods that continued their cultural traditions as they worked to adapt. Readers will learn why Italian immigrants left Italy, where they settled in America once they arrived, and how they became one of the most influential cultures on American society. The story of Italian immigration comes alive in this volume written by someone whose family endured it.