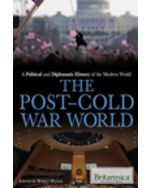 A Political and Diplomatic History of the Modern World: The Post–Cold War World, 1st Edition

The post-Cold War era began with a decade of conflicts often mediated by the United States as the world's only remaining superpower. The September 11th terrorist attacks, however, marked the dawning of a new era. The United States became preoccupied by the wars in Afghanistan and Iraq, while around the world, new challenges and threats emerged: a more assertive Russia, an increasingly powerful China, dangerous terrorism organizations, and a refugee crisis in the Middle East and Europe. This volume tells the story of this fraught era with great insight and a sure understanding of the complex interplay of action and reaction that characterized the proliferation of conflicts at the turn of the 21st century.