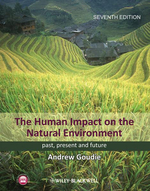 The Human Impact on the Natural Environment: Past, Present, and Future, 7th Edition

In Chapter One there will be a new section on recent ideas about Global Change, relating to such matters as Kyoto, Copenhagen, the Stern report, etc. There is also a need to review a large corpus of new ideas on the human evolution, domestication and current demographic trends. In Chapter Two, the section on fire needs to say more about fire histories, the section on desertification is very dated and so needs a complete re-write, and the same is true of the section on pollution effects on vegetation. Chapter Three may require rather less change, though the section on habitat change and animal decline is dated and too UK centred. Chapter Four needs to see an expanded section on soil carbon, and also needs to synthesise a great deal of recent work on the history of soil erosion and current trends in the Mediterranean lands and elsewhere. The section on soil conservation is also very dated. Chapter Five has many outdated examples, and in particular needs to see a new treatment of the nitrate issue. The section on marine pollution is rather brief and needs a good deal more on oil pollution effects and also on plastics in the worlds oceans. Chapter Six needs more material to be included on historical trends in human influences on rates of landscape change. Nearly all the material in the first half of Chapter Seven needs revision and expansion. Chapter Eight needs to be revised in the light of the IPCC report of 2007. Chapter Nine and subsequent chapters, were new in the sixth edition, and so do not suffer to the same degree from being out of date, but, on the other hand, there have been many detailed changes in knowledge that need to be incorporated, not least on the importance of such issues as Ocean Acidification and the potential effects of ice cap retreat on tectonic and volcanic activity.